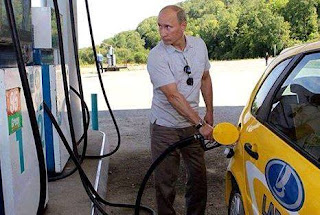 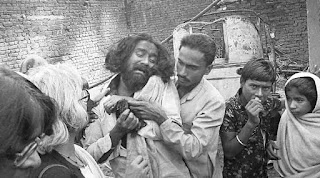 The blood of innocent Sikhs massacred in 1984, spilled in different parts of the country and seen on the cuffs of the then rulers has not been erased from the memories despite ganging up of almost all parliamentary political parties in seeing to it that perpetrators arenot punished. It is undeniable fact that since 1984 all kinds of political parties, left, right(which include BJP & Akali Dal) and centre ruled this country but the search for culprits is still on. It is in total conformity to what happened in cases of mass violence against Dalits, Muslims and Christians in different parts of the country. However the reality is that despite ‘national consensus’ over keeping incidents of violence against minorities under wrap, the blood of innocents keep on crying; unkaa lahoo pukarta hae!1984 massacre is in news once again.

This time it is a matter of acrimony between Congress leader Rahul Gandhi and RSS choice for prime-ministership, Narendra Modi. Itstarted with Rahul. In a speech in Alwar in Rajasthan, Mr. Gandhi said it had taken 15years to overcome his anger over the assassinations of his paternal grandmother, Indira Gandhi, the then PM of the country. He, though, remained criminally silent about anger of Sikhs and democratic sections of the country who were angry on the massacre of Sikhs and still are after almost 3 decades.Modi was quick to decry Rahul’s anger and reminded him that due to this hatred against Sikhs thousands of Sikhs were killed. Speaking in Jhansi, UP, Modi, Hindutva icon and RSS whole-timer lamented the fact that culprits are yet to be booked and tried for this massacre. Thus the blame game continues but Modi did not tell the nation what NDA governments which ruled this country from 1998 to 2004 did to bring to justice the culprits. 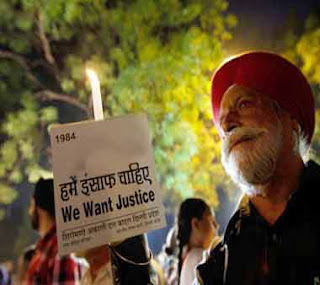 Modi also forgot to share the fact that as per the autobiography of LK Advani(page 430); it was his Party which forced Indira Gandhi to go for army action named as Blue Star which killed large number of pilgrims.It is true that despite innumerable high-power committees, police investigation teams and commissions these are few small fries who have been booked; the real culprits are still eluding the call of justice. The reality is that almost in last 3 decades though the country has been ruled by every shade of political opinion there has been no political will to prosecute the culprits.It is generally believed that the Congress cadres were behind this genocide. This is true but there were other forces too which actively participated in this massacre and whose role has never been investigated. Those who were witness to the genocide of 1984 were stunned by the swiftness and military precision of the killer marauding gangs (later on witnessed during the Babri mosque demolition, burning alive of Dr. Graham Steins with his two sons, 2002 pogrom of the Muslims in Gujarat and cleansing of Christians in parts of Orissa) who went on a burning spree of the innocent Sikhs. This, surely, was beyond the capacity of the thugs led by many Congress leaders. 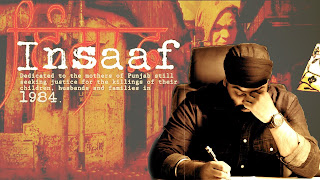 The author has in his possession a crucial document which may throw some light on the hidden aspects of the genocide and identify the overall forces which executed it. It was authored and circulated by veteran ideologue of the RSS, Mr. Nana Deshmukh on November 8, 1984. Interestingly, this document was published in the Hindi Weekly 'Pratipaksh' edited by Mr. George Fernandes (Defence Minister of India 1999-2004, and presently a great pal of BJP/RSS) in its edition of November 25, 1984 titled ‘Indira Congress-RSS collusion’ with the following editorial comment :'The author of the following document is known as an ideologue and policy formulator of the RSS. After the killing of Prime Minister (Indira Gandhi) he distributed this document among prominent politicians. It has a historical significance that is why we have decided to publish it, violating policy of our Weekly. This document highlights the new affinities developing between the Indira Congress and the RSS. We produce here the Hindi translation of the document.

'This document may help in unmasking the whole lot of criminals involved in the massacre of innocent Sikhs who had nothing to do with the killing of Indira Gandhi. This document may also throw light on where the cadres came from, who meticulously organized the killing of Sikhs. Mr. Nana Deshmukh in this document is seen outlining the justification of the massacre of the Sikh community in 1984. According to him the massacre of Sikhs was not the handiwork of any group or anti-social elements but there sult of a genuine feeling of anger among Hindus of India.This document also shows the true degenerated and fascist attitude of the RSS towards all the minorities of India. The RSS has been arguing that they are against Muslims and Christians because they are the followers of foreign religions. 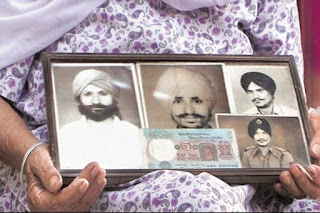 Here we find them justifying the butchering of Sikhs who according to their own categorization happened to be the followers of an indigenous religion.The RSS often poses as a firm believer in Hindu-Sikh unity. But in this document we will hear from the horse’s mouth that the RSS like the then Congress leadership, believed that the massacre of the innocent Sikhs was justified. Mr. Deshmukh in this document is seen outlining the justification of the massacre of the Sikh community in 1984. His defence of the carnage can be summed up as in the following.The massacre of Sikhs was not the handiwork of any group or anti-social elements but the result of a genuine feeling of anger among Hindus of India.Mr. Deshmukh did not distinguish the action of the two security personnel of Mrs. Indira Gandhi, who happened to be Sikhs, from that of the whole Sikh community. From his document it emerges that the killers of Indira Gandhi were working under some kind of mandate of their community. Hence attacks on Sikhs were justified.Sikhs themselves invited these attacks, thus advancing the Congress theory of justifying the massacre of the Sikhs.He glorified the ‘Operation Blue Star’ and described any opposition to it as anti-national.When Sikhs were being killed in thousands he was warning the country of Sikh extremism, thus offering ideological defense of those killings.According to this document it was Sikh community as a whole which was responsible for violence in Punjab. 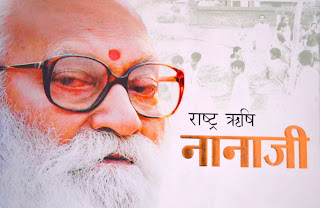 Mr. Deshmukh argued in the document that Sikhs should have done nothing in self-defence but showed patience and tolerance against the killer mobs.According to Mr. Deshmukh's thesis these were Sikh intellectuals and not killer mob swhich were responsible for the massacre. The former had turned Sikhs into a militant community, cutting them off from their Hindu roots, thus inviting attacks from the nationalist Indians. Moreover, he treated all Sikhs as part of the same gang and defended attacks on them as a reaction of the nationalist Hindus.He described Indira Gandhi as the only leader who could keep the country united and expressed the opinion that on the murder of such a great leader such killings could not be avoided. Rajiv Gandhi who succeeded Mrs. Gandhi as the Prime Minister of India and justified the nation- wide killings of Sikhs by saying, 'When a huge tree falls there are always tremors felt', was lauded and blessed by Mr. Nana Deshmukh in the following words: 'it is not todeny the truth that sudden removal of Indira Gandhi from Indian political scene has created a dangerous void in the Indian common life. But India has always displayed a characteristic inner strength in the moments of such crisis and uncertainty. According toour traditions, responsibility of power has been placed on the inexperienced shoulders of relatively young person in a lively and peaceful manner. It will be hasty to judge the potentialities of his leadership at this time. We should give him some time to show his ability.On such challenging juncture of the country, in the meanwhile he is entitled to get full cooperation and sympathy from the countrymen, though they may belong to any language, religion, caste or political belief.'There was not a single sentence in the Deshmukh document demanding, from the then Congress Government at the Centre, remedial measures for controlling the violence against the minority community. Mind this that Deshmukh circulated this document on November 8, 1984, and from October 31 to this date Sikhs were left alone to face the killing gangs. In fact November 5-10 was the period when the maximum killings of Sikhs took place. Deshmukh was just not bothered about all this.Deshmukh document did not happen in isolation. It represented the real RSS attitude towards Sikh genocide of 1984. The RSS is very fond of circulating publicity material,especially photographs of its khaki shorts-clad cadres doing social work. For the 1984 violence they have none. In fact, Deshmukh’s article also made no mention of the RSS cadres going to the rescue of Sikhs under siege. This shows up the real intentions of the RSS during the genocide.George Fernandes while making this document public in 1984 wrote that it showed  Indira Congress -RSS collusion’.

All those interested in finding the real culprits of 1984 must also investigate whether this collusion was confined to political sphere or went beyond to killing fields.[For perusal of the full RSS document see the following link:http://www.academia.edu/4890979/RSS_IDEOLOGUE_NANA_DESHMUKH_JUSTIFIED_MASSACRE_OF_SIKHS_IN_1984_From_RSS_archives_] 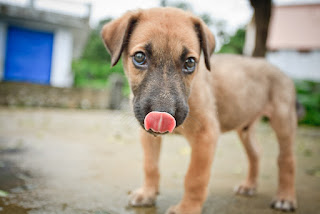 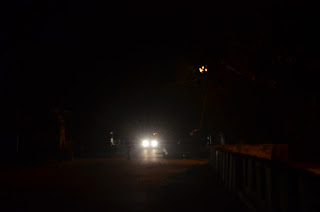 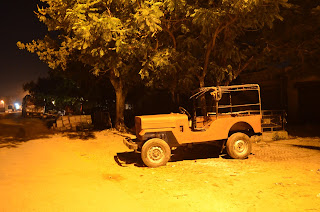 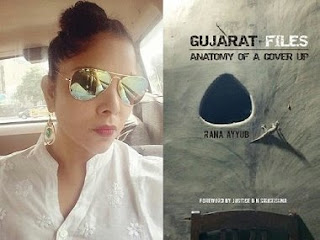